OCEARCH continues to make huge strides in maximizing the efficiency of white shark research in the Northwest Atlantic after the conclusion of its latest successful expedition, Expedition NASFA, off the Southeast coast. During the trip from Jacksonville, Florida to Savannah, Georgia, OCEARCH and its team of collaborating scientists satellite (SPOT) tagged four healthy white sharks and took samples from each shark to support 17 separate research projects.

This tactic of supporting numerous projects at a time eliminates the need for each study to individually sample their own sharks, drastically decreasing the number of animals that need to be handled. Fifteen researchers from 11 institutions joined OCEARCH on Expedition NASFA and all of the scientists collaborated to gather all of the essential samples needed for each of the 17 projects.

“We’ve conducted a few other expeditions to the region in the past and this is by far the most successful to date,”

“This collaboration is essential to fast-tracking the gathering of ocean data,” said Chris Fischer, OCEARCH’s founding chairman and Expedition Leader. “Now OCEARCH is working to break down some of the silos we often see the scientific community working in. By that I mean we’re pushing to keep researchers working together even after the expedition. We want to establish an environment where for example a scientist specializing in biotelemetry can work together with a scientist specializing in genetics in to order start solving some more complex problems.”

The SPOT tags each of the sharks were equipped with will send location data to a satellite, allowing everyone to follow the sharks’ movements in near real time via the OCEARCH Tracker. In addition to the four white sharks, four tiger sharks were also sampled during the trip with one getting a SPOT tag as well. 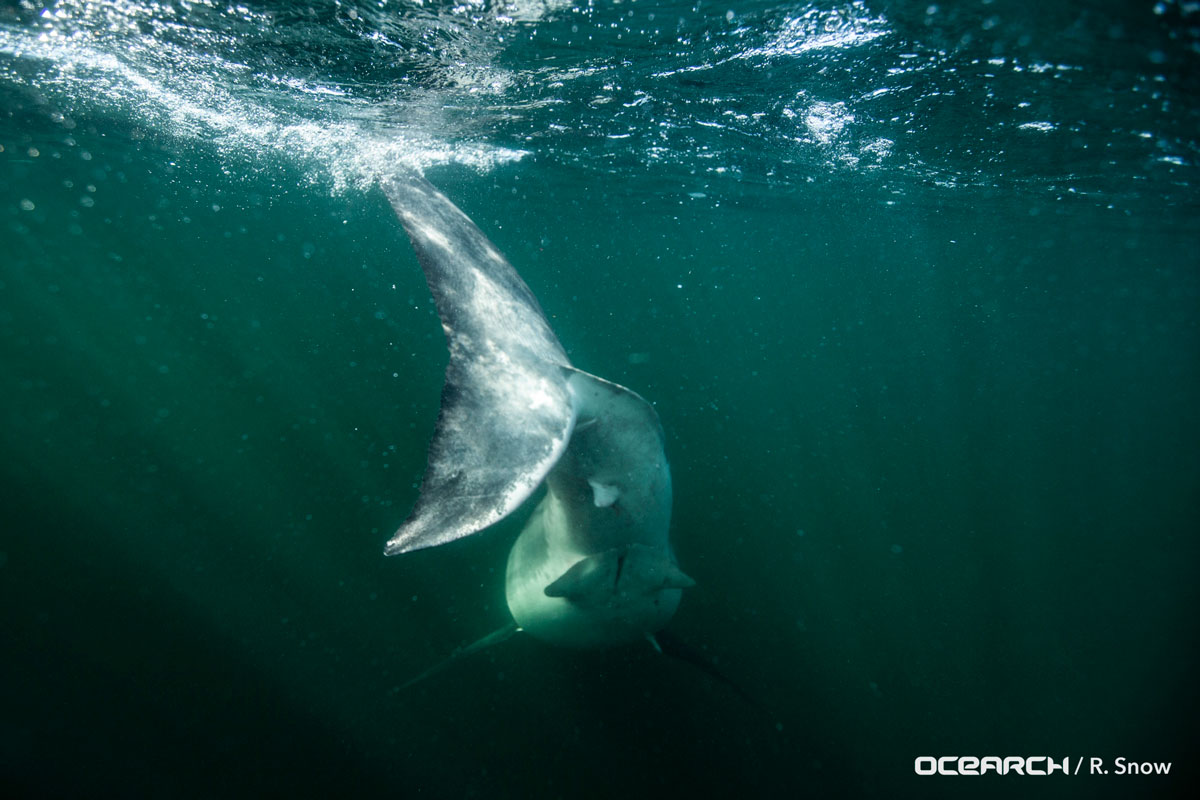 White Shark Caroline – Caroline is a 12-foot-9-inch mature female who weighs 1,348 pounds. She was tagged off the coast of Hilton Head, South Carolina and named by Costa Sunglasses and Sunglass Hut in honor of all the future ocean stewards in the Carolinas.

White Shark Brunswick – Brunswick is a 8-foot-9-inch sub-adult who weighs about 431 pounds. He was tagged off the coast of Hilton Head. South Carolina and named after the City of Brunswick, where the M/V OCEARCH has spent a lot of time being docked.

White Shark Helena – Helena is a 12-foot-5-inch mature female who weighs about 1,314 pounds. She was tagged off the coast of Hilton Head, South Carolina and named by SeaWorld after St. Helena Island.

White Shark Miss May – Miss May is a 10-foot-2-inch sub-adult female who weighs about 800 pounds. She was tagged off the coast of Fernandina Beach, FL and named after Mayport, FL which will be the future permanent home of OCEARCH at a joint facility with Jacksonville University.

Tiger Shark Lando – Lando is a 10-foot mature tiger shark who weighs about 464 pounds. He was tagged off the coast of Fernandina Beach, Florida and named by SeaWorld after the city of Orlando.

“We’ve conducted a few other expeditions to the region in the past and this is by far the most successful to date,” said Dr. Bryan Franks, Expedition NASFA’s lead scientist and Assistant Professor of Marine Science at Jacksonville University. “This trip is more evidence that this area along the continental shelf from South Carolina to Florida is an important winter habitat for white sharks. We learned that especially when the weather allows for safe access offshore, we can have pretty reliable access to these animals.”

“People need to understand that sharks are the balance keepers of the ocean, that’s why we conduct these expeditions,” said Fischer. “Without sharks the ecosystem falls apart. That means our great grandchildren won’t get to enjoy fish sandwiches and we don’t want to see that happen.”`

On past expeditions to the NASFA region, OCEARCH has tagged other white sharks such as Hilton and Lydia who have helped crack the white shark puzzle wide open. Any one of these new sharks could hold the key to solving the next big piece of the puzzle and OCEARCH encourages everyone to join in as we follow them on their journey.