The complex life of the great white shark off the Atlantic coast is revealed, and it’s very different from the one in Peter Benchley’s Jaws

In a new peer-reviewed paper published in the scientific journal Frontiers in Marine Science, OCEARCH and its collaborative research team, for the first time, provide a comprehensive analysis of the movements and migrations of white sharks in the western North Atlantic, over multiple years and life stages. Using an unprecedented dataset from a combination of animal tracking technologies, this landmark study analyzed the movement patterns of 48 white sharks tagged at different locations along the U.S. and Canadian Atlantic coasts.

“By collecting vital data for understanding the ecology and life history of white sharks in the western North Atlantic, we have identified this population’s critical habitats, and the linkages between these habitats, as the animals grow and thrive. These results are invaluable in developing effective management and conservation strategies in the face of a changing ocean, for the good of the sharks, their ecosystem, and ultimately, us,” said the study’s lead author Dr. Bryan Franks, Associate Professor of Marine Science at Jacksonville University.

The team’s findings show this population of white sharks makes predictable annual migrations between the northern and southern parts of their range, which stretches from Newfoundland to the eastern Gulf of Mexico. The sharks spend summer and fall primarily in coastal waters off New England and Atlantic Canada, feeding on high-calorie prey such as seals, before heading back south to warmer winter waters off the southeast U.S. from South Carolina to the Gulf of Mexico.

The paper reveals that white sharks demonstrate strong site fidelity, with individuals returning to the same location in multiple years, suggesting these animals use complex navigational cues to migrate over thousands of miles every year. This site fidelity focuses on critical habitats for feeding, growing, and reproduction within the population’s range, highlighting the importance of protecting those areas where the sharks frequently return.

OCEARCH Chief Scientist and study co-author Dr. Bob Hueter explains the next step is to “get this paper in front of policymakers engaged in everything from fisheries management to public safety concerns in the western North Atlantic. After decades of decline, the white shark population of this region is slowly rebuilding, thanks to conservation efforts over the past 25 years. This requires us to evolve our policy recommendations for their conservation and management and our paper provides the framework to inform that process.”

The paper also serves as a model to decipher the migratory patterns of white sharks in other regions across the globe. “Now that we understand their movements in the western North Atlantic, we can utilize this timing to zero in on the potential critical places for white sharks in other locations around the world. This is crucial for tackling more complicated migratory puzzles in regions where white shark populations are critically low,” said OCEARCH Founder and Expedition Leader Chris Fischer.

The paper is titled “Spatio-Temporal Variability in White Shark (Carcharodon carcharias) Movement Ecology During Residency and Migration Phases in the Western North Atlantic” and is downloadable for free through this link in the open-access Frontiers in Marine Science online publication. The paper concludes with a diagram of the life of the white shark, from birth to old age, shown here: 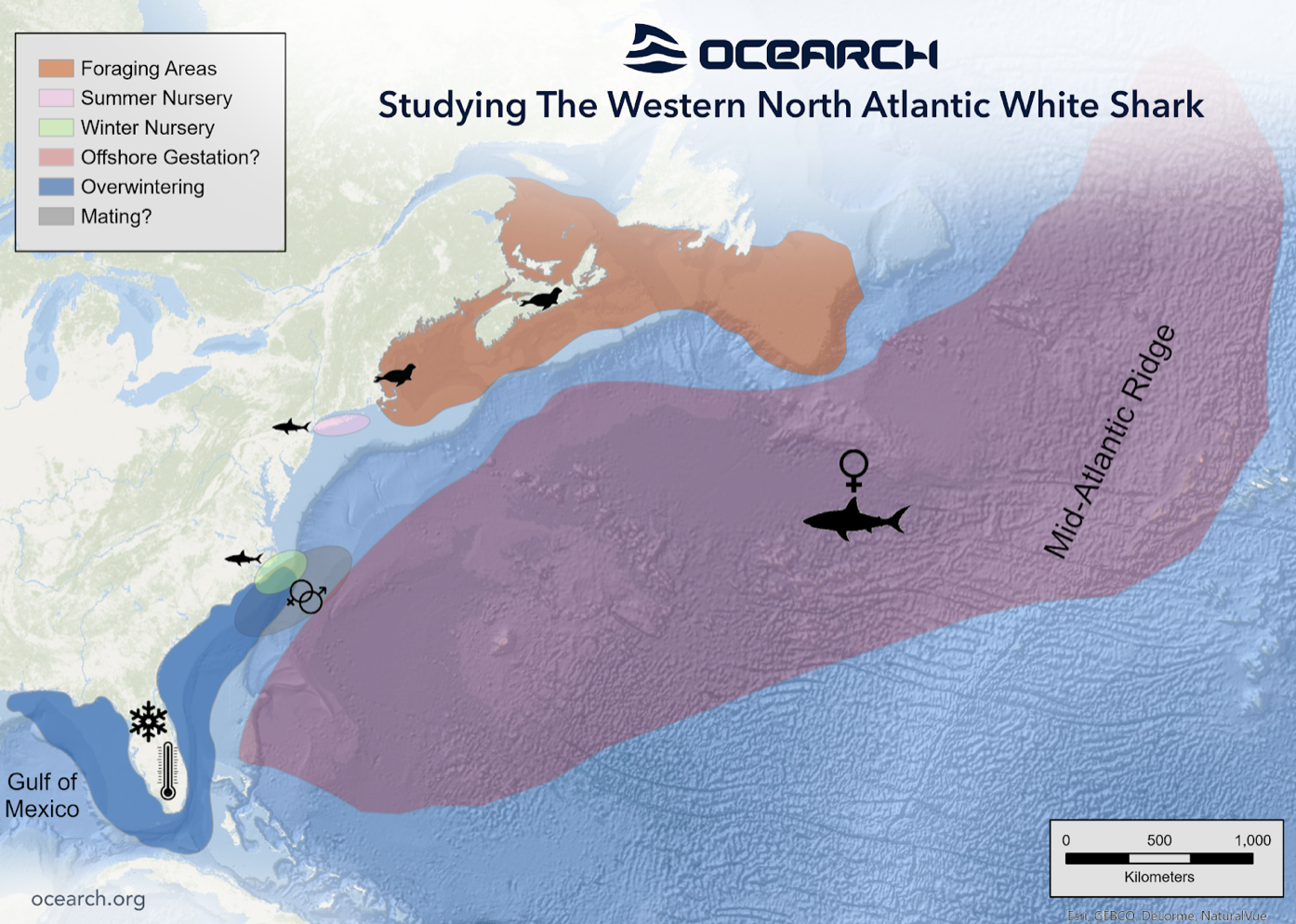 OCEARCH’s study of white sharks in the western North Atlantic has advanced through 24 different science projects in collaboration with 42 scientists from 29 research organizations, making these the most comprehensively studied white sharks in the world. Coming publications will explore these sharks’ health, feeding habits, reproductive cycles, and much more. The OCEARCH sharks can be tracked in near-real time online at OCEARCH’s Global Shark Tracker and through the free OCEARCH Global Tracker app for smartphones.