Tracking data from white sharks equipped with OCEARCH satellite tags reveals that the Atlantic continental shelf waters off North Carolina, South Carolina, Georgia, and the east coast of Florida are a winter hot spot for large white sharks. As seen on the OCEARCH Tracker, the heavy concentration of our adult and near-adult white sharks in this region suggests it’s an important winter habitat, which OCEARCH and collaborating scientists are now referring to as the Northwest Atlantic Shared Foraging Area (NASFA). This is in concordance with fisheries data that showed this area to be a wintering ground for white sharks, as previously published by OCEARCH collaborator Dr. Tobey Curtis and his colleagues.

“This is the beauty of OCEARCH’s North Atlantic White Shark Study, The sharks lead us from one step to the next….”

The OCEARCH Tracker shows at least eight white sharks have been detected in the NASFA in the past week, including adult white sharks Hilton and Katharine. The eight sharks are a good indication there are plenty more white sharks in the area with them. The waters off Charleston, South Carolina and Cape Canaveral, Florida have seen the highest concentration of detections. The sharks were tagged as part of an ongoing study started in 2012 by OCEARCH to uncover the mysteries of white sharks’ life history in the Northwest Atlantic. 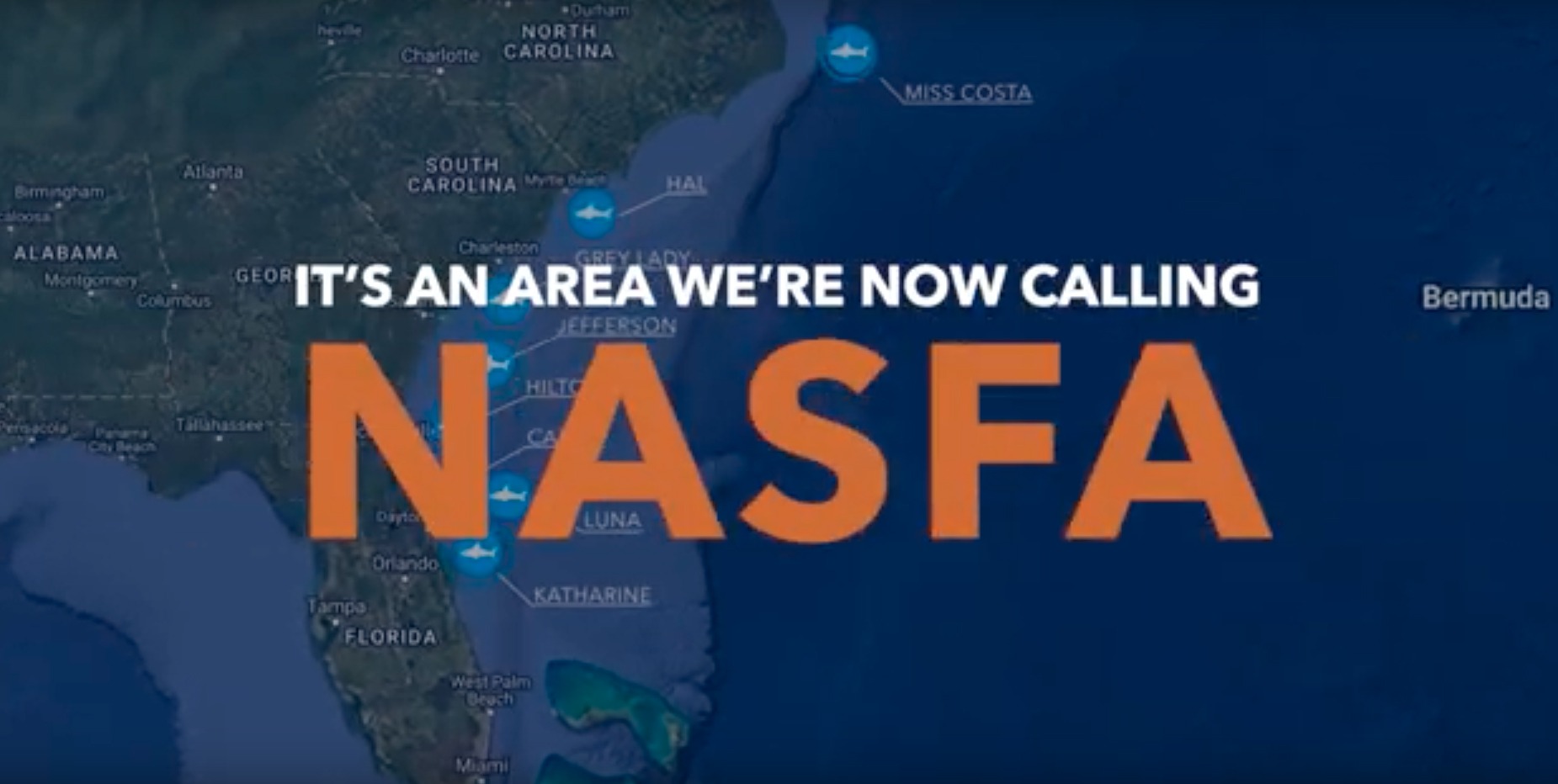 Since the beginning of the study, OCEARCH has consistently observed that nearly all tagged, large white sharks in the Northwest Atlantic visit the NASFA at some point during their migrations, with most visiting in the winter. OCEARCH has tagged white sharks as far south as Florida and as far north as Nova Scotia, Canada, and all of the larger tagged sharks have spent some time in the NASFA.

“The body of colder water trapped between the Gulf Stream and the coast is a key feature of this region,” says Assistant Professor of Marine Science at Jacksonville University and OCEARCH collaborating scientist Dr. Bryan Franks. “This ‘wedge’ of cold water extends from the Outer Banks in North Carolina down to Cape Canaveral in Florida. This feature results in a range of water temperatures in a relatively short horizontal distance from the coast out to the Gulf Stream. In addition, there is the potential for abundant prey in the migrating populations along the coastlines and in the dynamic mixing zone on the Stream edge.”

The tendency for white sharks to migrate to the NASFA bears some similarities to white shark behavior observed in the Pacific Ocean off the west coast of the United States. In the Northeast Pacific, different shark populations migrate from the Farallon Islands and Guadalupe Island to a Shared Foraging Area (SOFA), also popularly referred to as the White Shark Cafe, between the Baja Peninsula and Hawaii. OCEARCH tracked this white shark behavior in 2007-2009 and conducted a 30-day expedition to the SOFA in 2009. Studies by other scientists since then have tracked similar shark behavior.

OCEARCH is planning an expedition to the NASFA in February and has two other expeditions planned to try and tag more sharks off Massachusetts and Nova Scotia later in 2019. These expeditions aim to increase the sample size of tagged white sharks to get a clearer picture of white shark movements in the Northwest Atlantic and test scientific hypotheses about white shark movement and migration.

“This is the beauty of OCEARCH’s North Atlantic White Shark Study,” said Dr. Bob Hueter, OCEARCH Chief Science Advisor. “The sharks lead us from one step to the next, so that we can steer our ship to where we’re needed to fill in the gaps in our knowledge of this incredible predator. Each expedition builds on the previous ones to reveal the life of the white shark from birth to death in the North Atlantic. This is the best kind of science, and it’s exciting to be sharing these discoveries with our peers and the public.”

Follow the sharks through their migration cycles by accessing the near-real-time OCEARCH Tracker.

OCEARCH’s Cutting-Edge Science on the White Shark Returns to the U.S. Southeast Coast

OCEARCHJanuary 22, 2020
Stay Connected!
Get the latest tracker updates, giveaways, and events sent direct to your inbox.