Luna, Hal, Jane and Cabot ping in to let us know they’re back where we first met them.

The southern tip of Nova Scotia is lighting up right now with white shark pings on the OCEARCH Tracker. Four white sharks have all pinged in close proximity to each other and near the shore in Shelburne and Yarmouth Counties this week. One of the four sharks has already left the southern end of the province and advanced farther north near Halifax.

All four of the sharks were tagged during OCEARCH’s Nova Scotia Expedition in September and October of 2018. The sharks’ return to the Canadian province is more evidence that Canada plays a more important role in the life history of white sharks in the Northwest Atlantic than previously believed. The high frequency of pings and good resolution on the data collected over the past week will help OCEARCH and collaborating scientists to more thoroughly examine fine-scale habitat use of the sharks in the province.

“Many of the animals seem to be focusing their movements in and around the mouth of bays, potentially attempting to maximize opportunities for feeding.”

“We’re seeing our understanding of the importance of Canada’s Maritimes for the Northwest Atlantic white shark population explode right before our eyes,” says Dr. Robert Hueter, OCEARCH’s Chief Science Advisor and Director of the Center for Shark Research at Mote Marine Laboratory. “White sharks are designated as endangered in Atlantic Canada waters, but that’s been largely due to a lack of observations and scientific data. Day by day the data grows, telling us that Nova Scotia is a summertime home for white sharks.”

OCEARCH’s 2018 expedition to the province was spurred by the observation that a few of the sharks on the OCEARCH Tracker were bypassing the known fall aggregation site in Cape Cod and continuing up to Canada. Six sharks were tagged during the expedition and at least 4 have already returned, demonstrating strong site fidelity. Repeated, annual movements into these waters by the same individuals underpins the importance of these sites on Nova Scotia’s South Shore, particularly during the late summer and fall seasons.

The four sharks tracked in Nova Scotia this week include: 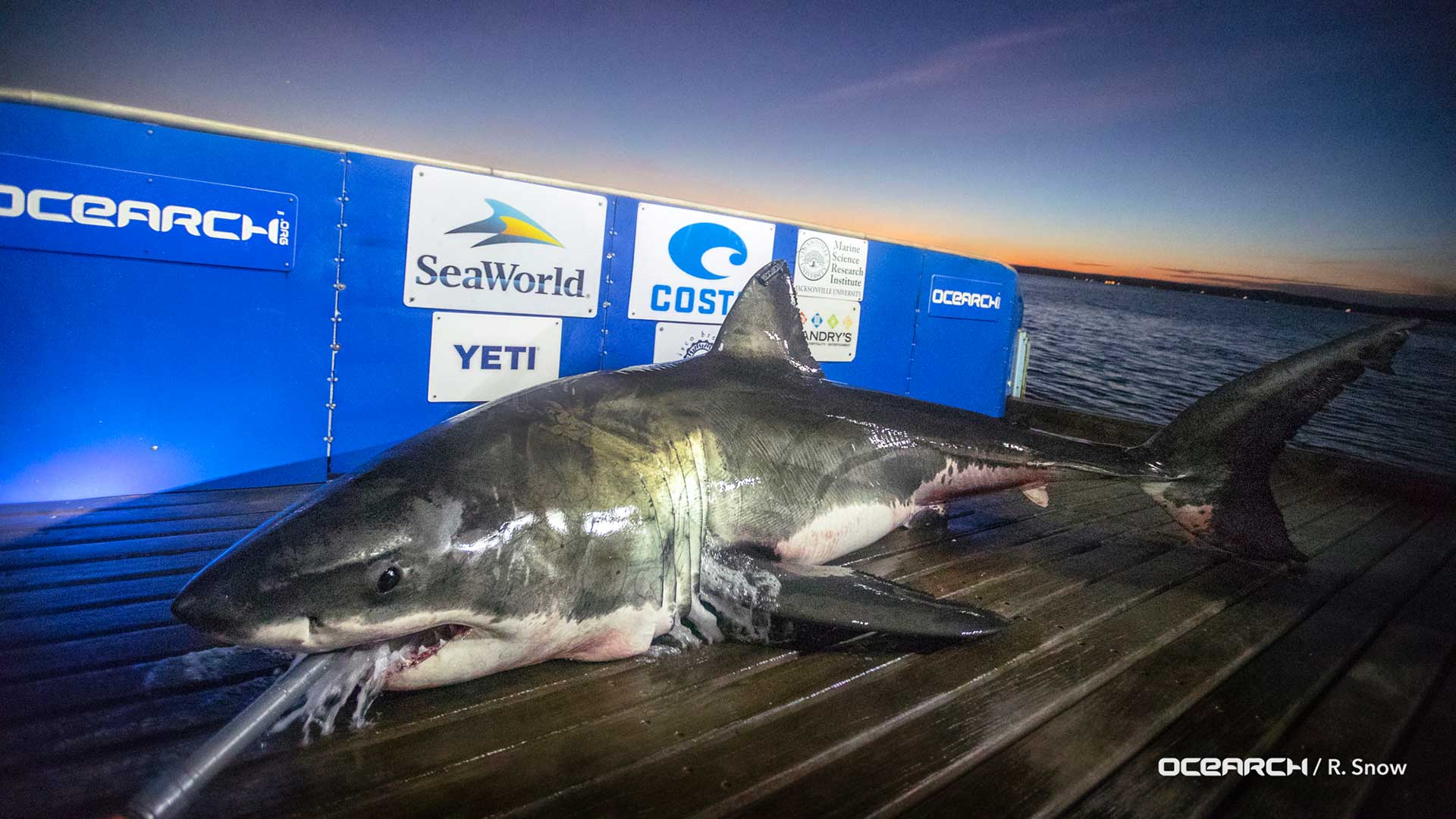 “The return of these sharks demonstrates the importance of this region for at least a subset of the Northwest Atlantic white shark population,” says Assistant Professor of Marine Science at Jacksonville University and OCEARCH collaborating scientist Dr. Bryan Franks. “Many of the animals seem to be focusing their movements in and around the mouth of bays, potentially attempting to maximize opportunities for feeding.”

Further evidence supporting the importance of Canadian waters to white sharks is the first tracked visits of two other sharks. White sharks Helena and Brunswick were both tagged in February of 2019 off the coast of South Carolina. Both also hurried past Cape Cod and into Canadian waters. Brunswick’s last ping was near the Magdalen Islands in Quebec while Helena is pinging in the Grand Banks off Newfoundland.

Satellite SPOT tags will continue to monitor the sharks’ movements each time they come to the surface long enough for the tracking devices on their dorsal fins to send a message to a satellite. The tracking data can be used to help identify the species’s critical habitats such as mating sites, foraging areas and pupping grounds. Additionally, numerous other samples were taken from the sharks at the time they were tagged. The samples will support 17 research projects around the continent in a collaborative effort to more efficiently answer important questions about these essential apex predators.